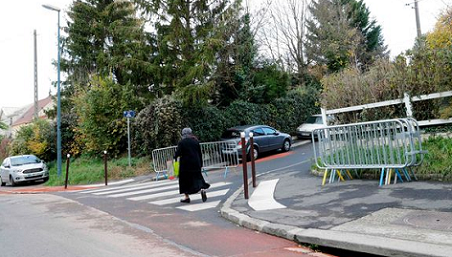 A French police officer who struggled to come to terms with his failing marriage shot his wife in the face, murdered three other victims before then turning the gun on himself.

The horrific incident took place in the northern Paris suburb of Sarcelles on Saturday following an argument between Arnaud Martin, 31, and his 25-year-old partner, who has not been named.

Pontoise prosecutor Eric Corbaux said: 'They were rowing in a car outside her parents' house just before the shooting.'

According to Corbaux, the pair were arguing about their separation before Martin took out his revolver and shot his wife in the face.


Despite her severe facial injuries, the woman has survived. Martin then shot dead a 30-year-old man and a 44-year-old father who had been celebrating his birthday with his children.

The killer then stormed his girlfriend's home a few yards away, killing her father and seriously injuring her mother.

He also shot the woman's sister in the leg and killed the family dog.

After his rampage, killed himself when he shot himself in the head in the garden.

French Interior Minister Gerard Collomb said: 'He was someone who was going to separate from his wife. He couldn't bear it.

'At some point he totally went off the rails. He was armed, so could shoot anyone. It was a police drama.'

On the killer, Corbaux added: 'According to his superiors, he was a good civil servant, a very serious former gendarme.'

Francois Pupponi, the mayor of Sarcelles, said of the victims: 'They were all local people. I knew them well because I lived on this street fourteen years.'

Martin was one of the Paris police officers who has been allowed to bring his weapon home following the devastating terror attack on the French capital in November 2015, were 130 people were killed.

Authorities claim it is better for officers that they are able to carry their weapons at all times in case of an attack.

Yet the policy has sparked controversy, with depressed officers using their weapons to harm themselves and others.

In September, a policeman in Noyon, north of Paris, killed his wife and their two children before turning the gun on himself.

Yet Collomb he would not change the policy which allows officers to take home their guns.

There has been a sharp increase in police suicides this year, with 46 officers and 16 gendarmes killing themselves in 2017. At least half of those who took their lives used their service weapons.