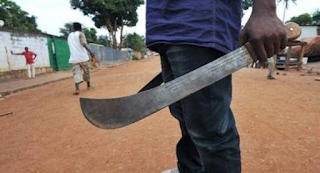 The operatives of the Abia State Police Command are currently investigating one Osinachi Amanze who hails from  Isiala Ngwa South Local Government Area of the State for allegedly killing his parents.

Also, in the Police custody in connection with the crime is one Chinacha Peter. The Commissioner of Police in the state Mr. Anthony Ogbizi has confirmed the arrest of the suspects in a Statement made available to The Punch in Umuahia the State capital.

He said a retired ASP Rowland Ikpeama in the company of the village head of Umuosama Umuokiri Nvosi in Isiala Ngwa South had reported at Omoba Police Station that Amanze killed his parents; Father, Jonah Amanze 92yrs and Gold Amanze 65yrs while they were asleep.


He said Amanze confessed to having killed the deceased with Peter, who hails from Umuokiri Ehinuguru in the same LGA.

He disclosed that the deceased have been deposited at the morgue, while effort has been intensified to recover the machete used in the act which suspects claimed was disposed of.