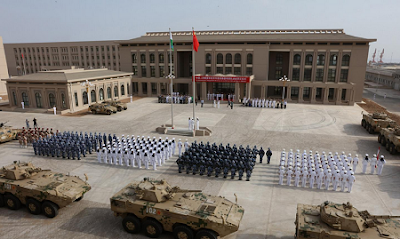 The soldiers were from China’s only overseas military base, which was completed in the country only months ago.

Beijing-based military analyst Zhou Chenming told The South China Morning Post that the exercises were likely a prelude to more sophisticated drills to be held later this year.

“The overseas troops will engage in regular military exercises just like troops serving [in China]. But their practice should soon have a different focus, rather than basic shooting training, because their mission in Djibouti is to protect China’s interests in Africa, as well as peacekeeping,” Zhou said.


China’s overseas military expansion was the focus of a July Pentagon report, which said that Beijing may soon seek to establish a network of similar facilities around the world.

China first started constructing the Djibouti base in early 2015. Located near one of the world’s busiest shipping channels, the Chinese Foreign Ministry said the move would allow China to contribute to regional peace and stability, and extend its efforts to combat Somali pirates.