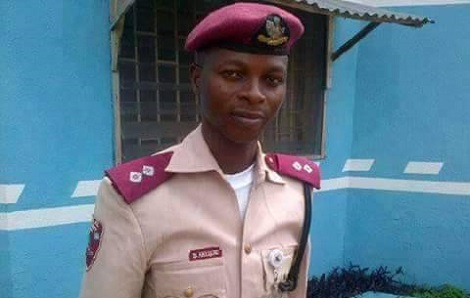 An officer with the Federal Road Safety Corps, Ondo Sector Command, Seinde Abolusoro, has been killed by a driver in Akure, the Ondo State capital.

The late FRSC officer was said to be on duty on Saturday when the incident occurred. Abolusoro was said to be at the FUTA North Gate area of Akure when the car driver veered off the road and hit him.

The victim died on the spot. According to a source, the driver, Sola Olagunju, who was reported to be heading towards Akure from Ilesa, had tried to avoid hitting a parked articulated truck on the road when he knocked down the FRSC officer, who was standing by the roadside.


The source said the driver was immediately arrested and handed over to men of the Ondo State Police Command.

However, the Police Public Relations Officer in the state, Mr. Femi Joseph, confirmed the incident, describing it as sad and unfortunate.

He said, “The suspect is in our custody and we have commenced investigation into the matter. He will be charged to court after investigation has been concluded.”