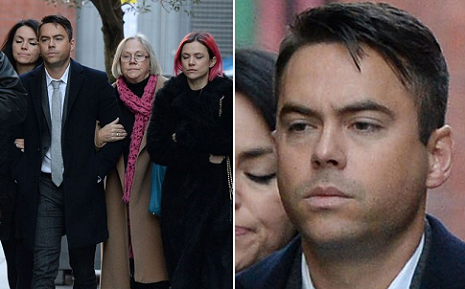 The grim-faced actor, 34, admitted both counts of sexual assault at Manchester Magistrates Court.

He was dressed in a smart charcoal grey suit and a pale grey tie as he left his home earlier this morning.

He was flanked by female family members as he made his way into the courthouse.


He was charged with two counts of sexual assault after allegations were raised by two separate women following a night at a Manchester music venue.

Langley's lawyer described the former Coronation Street star as "a man who has alcohol issues" who was "putting in a plea to avoid victims having to give evidence at a trial".

Prosecutors told the judge that Langley grabbed his two victims "by the crotch". The court is now deciding whether to sentence him today.

"He grabbed me properly. He grabbed me on the crotch," the first victim later told police, the court was told.

The woman detailed how Langley had grabbed her over clothes and told the court how it made her feel.
She told police she felt "shocked and angry".

The woman thought about hitting him but was in too much shock to act, she told police.

"Did you do that on purpose?" the woman is said to have asked Langley.

Langley did not reply, the court heard.

Prosecutor Karen Saffman told the court Langley was at the venue on that night and was "clearly intoxicated".

It is not clear when he will be sentenced.