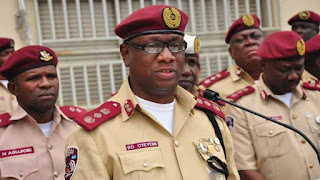 The Corps Marshal of the Federal Road Safety Corps (FRSC), Mr Boboye Oyeyemi, says a massive self-cleansing to rid the corps of corrupt officials is ongoing.

Oyeyemi, who made the disclosure in Ibadan on Thursday, said 25 officials of the Corps had just been relieved of their jobs in Abuja. He said this was done after various allegations of corruption were established against them.

The FRSC boss was fielding questions from reporters at the 2017 Press Week of the Nigeria Union of Journalists (NUJ), Oyo State Council.

He delivered a lecture,entitled, “Road Safety in Nigeria: Challenges and Prospects” at the event.


Oyeyemi said his leadership would not tolerate any form of indiscipline among officers of the Corps.

He pleaded for the cooperation of members of the public in achieving the goal.

“Just on Wednesday, I sacked 25 officers over corruption-related offences and  I will still sack more.

“No corrupt officer has any business being in the Corps as the Federal Government has done everything within its power to make us comfortable.

“I will plead for the cooperation of members of the public to give information on corrupt officers and be ready to establish their allegations when they are called upon to testify against the erring officials,” he said.