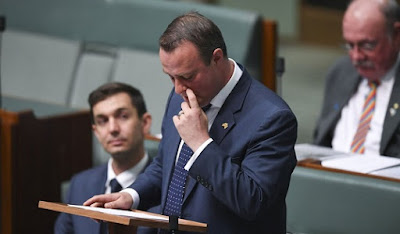 A gay Australian lawmaker popped the question in parliament on Monday, proposing to his partner moments after a Bill paving the way for same-sex marriage was introduced.

Tim Wilson, who has reportedly been engaged to Ryan Bolger for nine years, fought back tears as he thanked his fiance for enduring a marriage debate that "has been the soundtrack to our relationship."

"In my first speech I defined our bond by the ring that sits on both of our left hands -- that they are the answer to the questions we cannot ask," the 37-year-old lawmaker from the ruling conservative party said.

"So there is only one thing left to do: Ryan Patrick Bolger will you marry me?" Mr. Bolger, who was sitting in the public gallery, quickly responded "yes" as the floor erupted in applause.


"That was a 'yes', a resounding 'yes'," house speaker Rob Mitchell noted for the record. "Congratulations, well done mate."

Mr. Wilson earlier emotionally recalled the uneasiness he experienced with some friends when he and Bolger were first engaged.

"Many simply didn't know how to react. Many SMS went unresponded. In conversations some people politely changed the topic, or fell silent entirely," he said. His partner had pushed him to have an engagement party.

"On informing one person of our news, they responded: Why bother? At the time I fell silent and I have never had an answer to that question. But the Australian people have now answered that for me."