Woman Arrested For Smoking,Threatening To Kill Fellow Passengers On Plane 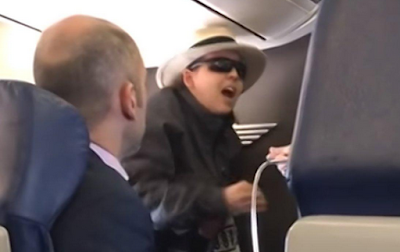 A woman flying from Portland to Sacramento was arrested after she threatened to kill everyone aboard the flight.

Valerie Curbelo of Sandy, Ore., was taken into custody on Saturday for making threats on a Southwest Airlines flight.

In a video taken by another passenger, the 24-year-old woman is seen berating a flight attendant while grabbing her belongings.


The clip ends with fellow passengers stepping up to help flight attendants calm the irate woman.

According to the Sacramento Bee, the drama started when Curbelo went into the airplane's bathroom and tampered with the smoke detector so she could smoke a cigarette.

Curbelo started screaming and making threats when she told that it was a violation to smoke on the aircraft.

Curbelo was arrested after the plane landed at the Sacramento International Airport. She faces three felony counts of making criminal threats, and remains in the Sacramento County Jail on $75,000 bail.

Curbelo told CBS13 from jail that she needed to smoke because she was experiencing anxiety. When asked about threats to kill her fellow passengers, the woman denied she said it.