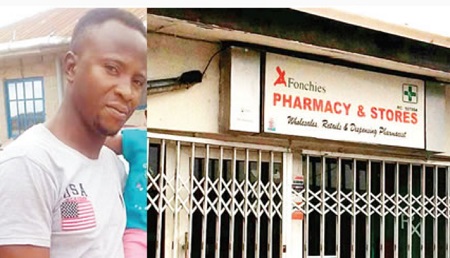 An autopsy report is being awaited by the Lagos State Police Command to clear the air on the cause of death of an electrician, Idris Lasisi.

Idris was found dead in the attic of a pharmacy on Abraham Adesanya Low Cost Housing Estate in Ajah on Monday.

The family of the deceased alleged that he was murdered, claiming that there were bloodstains in his mouth and neck while his phone was not found.

But the pharmacist, identified only as Bayo, claimed that the father of one was electrocuted. It was gathered that Bayo was being quizzed by the police at the Ogombo division on the circumstances surrounding the electrician’s death.


Punch Metro learnt that Bayo had engaged Idris to do some electrical work at the pharmacy on Saturday.

At about 7pm, the 33-year-old was said to have called his wife on the telephone, informing her that he was rounding off.

The wife, Bunmi Lasisi, explained that after awaiting his return for hours, she called his line, but it indicated that it was not reachable.

She said she went to bed, thinking he had gone to pass the night at his elder brother’s residence in Lakowe, Ajah.

She said, “We visited his mother on Saturday at Owode, Ajah. He said he wanted to do a job for Mr. Bayo and he went there from Owode. Around 7pm, he called me and said he was about to leave the pharmacy. He asked me what he should buy for me and I told him to buy apples.

“I waited for him till around 9pm and his line was not reachable. The following day, I tried calling him again, but his line did not connect. He went there in a car; so I thought he was using it for commercial purposes and believed he would soon return home.

“I informed his mother and she called his elder brother to know his whereabouts. The brother said he did not see him. We called his friends; they said they didn’t see him. It was on Monday that we traced him to the pharmacy and found his corpse in the attic.

“He had injuries in the neck and armpit and blood was in his mouth. The owner of the pharmacy claimed that he was electrocuted; but he was not, he was attacked. He used an earpiece, but we did not find his mobile phone. His car was on the premises.”

The deceased’s mother, Samiat, urged the police to conduct proper investigation into the matter, saying she suspected foul play.

The elder brother, Ramon Lasisi, explained that Bayo claimed to have invited another electrician on Saturday to check the roof after workers at the pharmacy complained that they did not see him (Idris).

“He said the electrician did not see him. How did they find his corpse on Monday? If he was electrocuted, blood would not come out of his body. The electrician has also been arrested. My brother was probably attacked and the assailants tried to make it look as if it was an electrocution. His phone is also missing,” he added.

Bayo, who spoke briefly with Punch correspondent on the telephone from the station, absolved himself of any wrongdoing, saying the blood from the corpse could be due to decomposition.

He said, “I am at the station now. He had been working for us for about eight years. It was when I wanted to open the shop on Monday morning that I discovered his corpse and I informed the police immediately. He was electrocuted.”

However, Bayo’s representative, who did not want his name in print, later gave Punch Metro his account of what transpired at the pharmacy from Saturday to Monday.

He said, “On Friday, Bayo invited the man to fix an electrical fault at the store where the incident happened. He did not come. On Saturday, he came and went to the attic. Workers at the store did not see him come down. They looked around for him and called Bayo when they did not see him.

“Bayo told them to check him in the attic. The two workers are a woman and a fat man. They could not climb up. His car was outside and he had a flat tyre. So, they thought he was running around to fix the tyre.

“When they wanted to close, they called Bayo again, saying they had not seen the man and that the electrical fault had not been fixed. He told them to look for an electrician to go up and check if the man was there. The electrician went up, used a torch to look around, but said he did not see anybody. The store was closed afterwards.”

The representative explained that the shop opened the next day for operations and closed at the normal time without the workers noticing any strange occurrence.

He added, “By Monday when they wanted to open the shop, they noticed liquid dripping from the ceiling and strange odour. The owner reported at the Ogombo Police Station. In the course of decomposition, the body will swell and the skin will tear. The body fluid will come out. That was what happened.”

The Lagos State Police Public Relations Officer, SP Chike Oti, said investigation had commenced into the incident, adding that an autopsy would be conducted on the deceased to ascertain the cause of death.