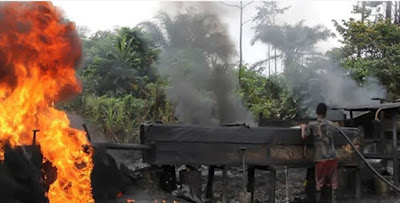 Fresh facts yesterday emerged as to how at least 20 persons were burnt beyond recognition penultimate Tuesday in an inferno at an illegal crude oil refining site in Kolo Creek, Ogbia Local Government Area, Bayelsa State.

Well over a week after the incident, none of the special security outfits deployed to fight illicit oil theft and refining in the Niger Delta region has issued a statement on the incident, but it was learnt yesterday that the agencies may have been aware of the existence of the site but declined to act.

The Joint Task Force (JTF), Operation Delta Safe (OPDS) and the Nigeria Security and Civil Defence Corps (NSCDC) are directly in charge of monitoring and curbing illegal bunkering, pipeline vandalism and proliferation of illegal refineries in the oil-rich region.


Quoting from a leaked memo copied the security commanders, a source informed This day yesterday that since the 15th of September, the bodies responsible for stopping the illegal acts had been tipped about the activities of the bunkering syndicate.

“The activities of these criminals constitute an economic sabotage to the nation as well as endangering lives and properties, as explosions on this pipeline may lead to disaster,” the letter written by the police top hierarchy in the state to both agencies indicated.

Also, more than a week after the incident happened, the charred remains of the victims were still said to be littering the site of the explosion which, it was learnt, was ignited from a stove that one of the illegal refiners was using to cook noodles.

“When we got there, I almost vomited. I saw charred remains of people. They were burnt beyond recognition. In some cases, you could only see dismembered heads and feet of victims.

“Despite the burnt bodies, we still met people illegally burning crude oil there,” the source, who declined to be named, said.

He added: “We thought that the security agencies, especially soldiers, would have taken over the place, but we didn’t meet any security operative.

“We only met people who were still refining illegally bunkered crude oil. It was terrible.”

Police Public Relations Officer (PPRO) in the state, Mr. Asinim Butswat confirmed the explosion but declined the request to validate claims that the police authorities had dispatched letters to other security agencies alerting them on the danger of not clamping down on the illegal site.