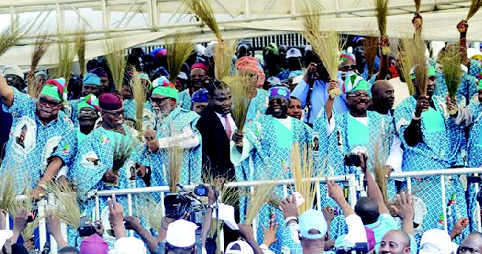 The National Leader  of  All Progressives Congress (APC), Asiwaju Bola Tinubu, Governor Abiola Ajimobi of Oyo State, two other governors and other chieftains  of the party yesterday formally received  the immediate past  governor of the  State, Adebayo Alao-Akala, former Senate leader, Senator  Teslim Folarin and other top politicians  to the APC.

Alao-Akala’s deputy while in office, Ambassador Taofeek Arapaja, the only Peoples Democratic Party (PDP) member of the House of Representatives from the state, Dokun Odebunmi, and a host of others to the party were received at a massive rally at Mapo Hall, Ibadan

The rally was to also celebrate the 68th birthday of Governor Ajimobi.


Addressing the huge crowd of party supporters and others who defied the scorching sun to witness the event, Tinubu said the APC has all it takes to accommodate the political heavyweights joining its fold.

Other defectors were a  former Secretary to the Oyo State Government, Ayodele Adigun, the immediate past PDP State Chairman, Yinka Taiwo and five Accord Party members in the state House of Assembly.

Hmm it is a serious matter.