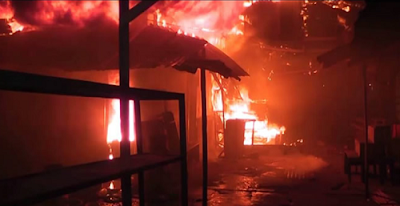 Hoodlums have set the Ughelli office of the Delta State Independent Electoral Commission ablaze moments before the commencement of the local government election in the State.

The incident it was gathered occurred in the early hours of Saturday. The building housing sensitive materials for the exercise was razed by arms’ wielding youths. The youths were said to have defied  security operatives.

A Punch correspondent was told by credible sources that the youths had earlier protested the non inclusion of result sheets in the voting materials before the incident.

It was gathered that many persons were injured in the incident but no life was lost as the hoodlums shot indiscriminately.


Ughelli north is where both the Delta State 2015 governorship candidate of the APC,  Olorogun O’Tega Emerhor, and the senator representing Delta Central, Chief Ovie Omo-Agege also of the APC come from.

Meanwhile,  the Chairmanship candidate of the All Progressives Congress for Uvwie LG, Engr. Ufuoma Okenini, has raised the alarm that APC members were under threat by political thugs suspected to members of PDP.