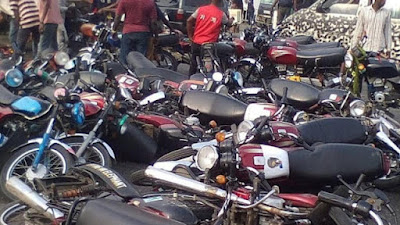 The Lagos State Task Force on Sunday said that it had impounded 4,500 motorcycles (Okada) from riders who had defaulted the states traffic law.

It added that the task force was awaiting the directives of Gov. Sanwo-Olu of Lagos State on whether to destroy them or not.

The Head, Public Affairs Unit of the agency, Mr Taofik Adebayo, said that the enforcement of the laws concerning the safety of lives regarding motorcycle riding in the state had drastically reduced the number of ‘Okada’ casualties recorded in hospitals.


According to him, Gov. Babajide Sanwo-Olu during his first 100 days in office said that he will soon give directives on what to do with the impounded bikes in line with the operations of motorcycles in the state.

“We have no less than 4,500 impounded bikes awaiting to be crushed but at present, we are awaiting the Lagos State Government’s directives with the ones we have now.

“We are not relenting and we will continue to impound motorcycles that default as we come by them,” he said.