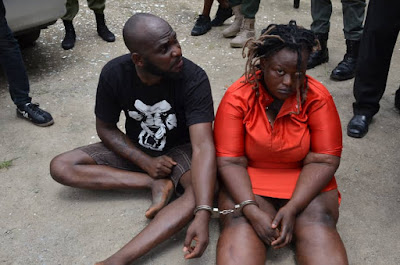 The Lagos Police have arrested a couple for allegedly stealing N38 million at a health insurance company.

Funmilayo Oyelaja, 38, and Tunde Ogunseye, 42, fled to Ghana after the crime, but were arrested after Mr Ogunseye returned home for the burial of his mother.

The police paraded the couple in Lagos on Monday. Although not legally married, they have been partners since 2015.

Ms Oyelaja, who is the prime suspect, worked with Clearline Health Insurance Limited where she allegedly siphoned money meant for health insurance.


Mrs Oyelaja said she worked in the company’s account department for 10 years and stole “only N38 million”, contrary to the N60 million the company alleged.

She claimed that the company diverted the money that was meant to return to NHIS, to an account where the company fixed it, and her superiors were aware of the illegality.

She gave the names of the superiors as Kolawole Samuel and Patricia Ogundeinde.

Tunde Ogunseye, the partner who was arrested by the police, said he did not know much about the crime, only that they travelled to Ghana together.

He claimed she has been his girlfriend since 2015 and they already had their visas before they received a strange call advising them to leave Nigeria.

The couple travelled to Ghana in 2017. Mr Ogunseye said he lost his mother and had to come to Nigeria for the funeral arrangement and that was how he was arrested.

“I lost my mum last week and I was at the burial where they came to arrest me,” he said.

Ms Oyelaja, however, said she came on her own to make confessions, seeing that her partner had been arrested.

Ijeoma Anyiam, a representative of Clearline Health Insurance Limited who was present when the suspects were paraded, gave the company’s side of the story.

Mrs Anyiam is the company secretary and general manager in charge of administration.