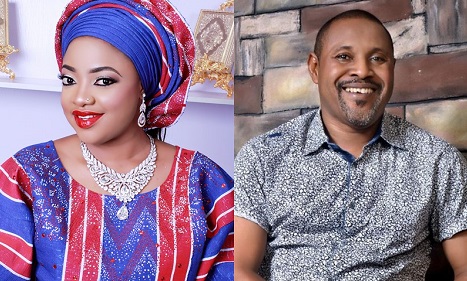 Saidi Balogun has reacted to the scam allegations levelled against him by Tayo Sobola when he dragged him in after calling out a certain Idris Bello for fraud. Sotayo had said Saidi introduced Bello to her and Bello had scammed some of her followers to the tune of N4.7m.

Now Saidi has decided to respond explaining how it all happened. His side of the story;

''I want to address the issue attempting to drag my name in the mud of social media. I would have ignored the matter but I realized that keeping quiet would further fuel the misconceptions and put me in a bad light.

''Firstly, I wasn't involved in any scam rather, I'm equally a victim. This is not a decision to hate or indict anyone but to clear things up.

''A man named IDRIS BELLO came to me a few weeks ago and introduced a Hajj trip package. I wasn't interested initially until he showed me a copy of my colleague IBRAHEEM CHATTA'S advert which he has been doing for his company. I was convinced knowing how well Chatta is very versed on religion and Islamic matters, so I decided to give it a shot but i didnt record any Visual and radio jingle for him except my picture that he used on his flyers.

''A few days later, he pleaded with tears in his eyes that I should get some of my junior colleagues in the industry to buy into the traveling packages, he further explained that he had invested 20million naira already on the project and he was running into a huge loss.

''His story seemed convincing, so I decided to encourage him by introducing MUSTAPHA SHOLAGBADE (versed in Islam)and SHOTAYO SHOGBOLA to his package.

''During his birthday at Oriental hotels, VI, where he proposed to his fiancee in the presence of my self Lateef Oladimeji, Ibraheem Charter, Shotayo, Mustapha. The gathering gave me a total conviction that the man is up to the task. I felt that if he could bring us all under one roof in one day, he might be able to pull bigger jobs. I guess I was wrong. I decided to run an advert for his package which he paid like 0.5% of the deal we earlier agreed on and complained there was little or no turnout, I believed him and took further steps. 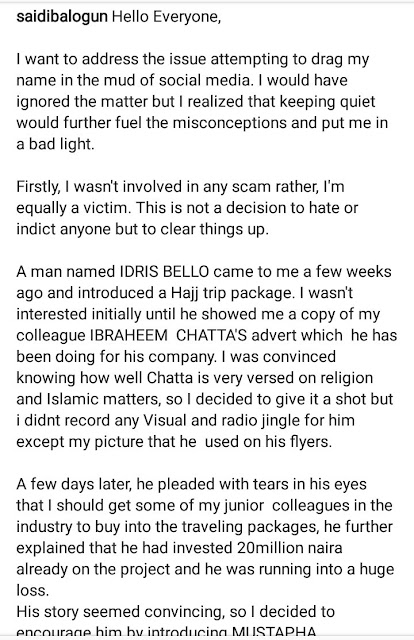