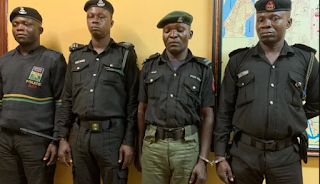 Four police officers attached to the Rapid Response Squad, RRS, have been arrested for allegedly extorting N5,000 from a woman in Ajah area of Lagos, Southwest Nigeria.

The information leading to their arrest was given by the Force Public Relations Officer, Frank Mba.

The information on their arrest was captured on the RRS twitter handle.

The RRS said the officials had been arrested and detained, saying that they would be transferred to the headquarters on Monday for trial.
.