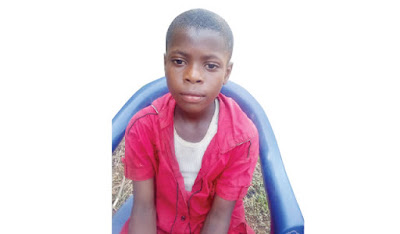 Master Chidera Nwankwo is a 10-year-old boy who was kidnapped along with his younger brother, a two-year-old boy. But Chidera was later found after he was left on a road at Ngwa in Abia State by the kidnappers, who took his brother away. He shares his experience in the hands of the kidnappers with RAPHAEL EDE

On Wednesday, April 8, 2020, a lady came to our house and told me to go and get what my mother bought in the market. And I couldn’t leave my younger brother behind as there was no one else at home, so I carried my brother and followed her.

Did you know the lady?

No, but I had earlier seen her with my mother; that was why I followed her. While we were going, they stopped a ‘Keke Marwa’ rider (commercial tricycle rider) who took us to New Garrick Market but I did not see the items she asked me to come and carry. Then they brought a car that took us to a park and we took a vehicle going to Aba. I asked them where we were going and they said we were going to where my father was going to minister.

I was going to shout if they didn’t tell me where they were taking us to. I don’t know what happened from that moment till when it was already dark. They took us to a hotel where we slept. In the morning, the owner of the hotel – a woman – brought biscuits and a soft drink for us to take but I refused to eat or drink anything. She persuaded me to drink it but I refused. So the woman took us in her car and when we got to a certain place, she stopped. The man with them gave me N200 to go and buy anything that I wanted. I told them I did not want anything.

So he called a tricycle rider and we got in, but the woman from the hotel left. The rider took us inside a village and at a point, they stopped an okada man (commercial motorcyclist) and the woman with us took my brother and they got on the bike. The man said the tricycle would me and him to meet them where they were going. When we got to a bus stop, the man asked me to get down and look for my brother in the shops there. He said he wanted to go to the bank to get some money so that he would take us home.

Do you know the hotel where you slept?

No, but I know it is in Aba. If I see the hotel again, I will know it but I don’t know how to get there.

How do you know it is in Aba?

I saw signposts that showed that we were in Umahia and then Aba.

How did you reunite with your parents?

I saw an ‘okada man’ and asked him questions; I was crying. He called a woman who could speak my language. She asked for my name and some other things. She asked where I left from and I said Akwuke in Enugu.

I told her my parents (phone) numbers and the woman called someone living in Akwuke to ask if there was a family whose children were missing. That was after she had called my father and my mother and their lines were not available. It was the person she called that was able to reach my father through the line I gave them.

If you see the people who kidnapped you, will you be able to recognise them?

Yes, I can recognise the two of them.

What is your prayer for your brother?

I pray that he will be rescued and will be in good health. I pray no evil will befall him.