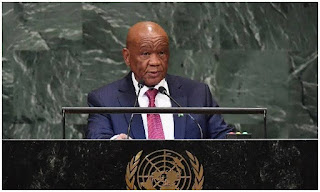 On the cusp of stepping down, Lesotho’s embattled prime minister has denied in an interview with AFP any role in the murder of his estranged wife, a drama that has gripped the tiny kingdom for months.

The octogenarian Thomas Thabane has been under pressure even from his own party to resign over the accusations, and he has agreed to go — but only on the grounds of his old age.

In a telephone interview with AFP, Thabane vehemently denied he was involved in the 2017 killing of his 58-year-old wife Lipolelo, who he was in the process of divorcing.

Police have questioned but not charged Thabane in the case, which has triggered a protracted political crisis in the mountainous southern African nation, although his current wife has been indicted.

“For me it is not the best subject to deal with because a woman who was my wife and who I loved was killed and I don’t kill people and I wouldn’t kill my wife. No, no!” he said.

– ‘Very painful’ –
The couple had been locked a bitter divorce at the time and her death sent shockwaves through a country with a history of political instability.

Thabane admitted that they had “a bit of a disagreement” just before she was killed — two days before his inauguration.

“This matter is not only a matter of great pain to me and it came out as a huge embarrassment. And it’s painful, very painful,” he said.

His political rivals say he has been seeking immunity from prosecution as part of a “dignified” exit from office that has been mediated by South Africa.

Sounding relaxed and contemplative in the interview, the two-time prime minister said he did not want to serve out his term which is due to end in 2022.

“I have served enough in this… and other capacities and the time has come for me to retire,” said Thabane, who turns 81 in two weeks’ time.

“All I look forward to… is for me to be left alone,” he said.

“All the other things that are being said are just nonsense.

“I don’t want to worry my heart about that and I also don’t want to spoil my happiness by delving into things that just make me feel very sad.”