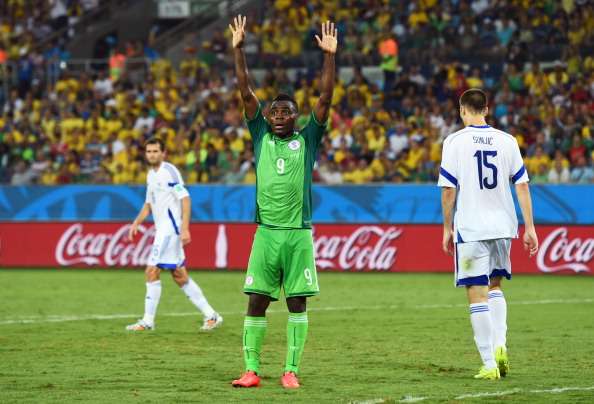 The Al Ain forward has decided to focus on his
club career after scoring 9 goals in 37
appearances for the Super Eagles
Nigeria forward Emmanuel Emenike has
announced his retirement from international
football at the age of 28, becoming the second
player after Vincent Enyeama to sign out of the
senior national team.

The Al Ain player who was top scorer at the
2013 Africa Cup of Nations in South Africa took
the decision for peace to reign in the Super
Eagles where he felt should not be a â€˜family
houseâ€™ or a â€˜threat zoneâ€™ to any individual.

Reports had suggested that Emenike might be
kicked out of the Super Eagles setup no thanks
to his poor form for the country. He had
struggled for goals since finding the back of the
net against Ethiopia in Addis Ababa during the
2014 Fifa World Cup play-off in October 2013.

This might have forced him out of the team,
bringing an end to a Nigeria career that saw him
play in one World Cup and one Africa Cup of
Nations where his four goals handed the Super
Eagles their third title as well as the topscorerâ€™s
award.

He wrote on Instagram: â€œNo more Eagles
career! After five great years, I am happy to
announce that I have put full-stop to my national
team career for the sake of national peace.â€

â€œItâ€™s a pleasure for me to have played for this
great country. I never regretted it and I think itâ€™s
the best time to end it. Million thanks to all the
fans who have been very supportive during the
good and bad times.

â€œI am very proud of my performance, I am
proud of my team mates and I am very proud of
the nation called â€˜Nigeriaâ€™. My Afcon gold medal
is a sign of great achievement, My Afcon
topscorer award speaks a lot about my
commitment and dedication to the team. Super
Eagles is a camp not a family house, and it
shouldnâ€™t be a threat zone for any individual.
â€œI have done according to our national anthem.

All my dreams came true in the national team, I
dreamt (sic) to win Nations Cup for Nigeria after
20-years, I dreamt (sic) to played at the World
Cup as well as to make a name for myselfâ€¦ In
the space of five years, I got them. Iâ€™m a
winner!

â€œFor every disappointing fans, maybe due to my
inability to re-establish my goal scoring instinct
for Super Eagles, I will like to say Iâ€™m sorry but
the ones I had scored counted well for the
team.

â€As long as Nigeria remains, you and I will
always remember the name â€˜Emenikeâ€™. â€œFinally,
I am happy to make a bow and continue
supporting the team every time,â€ he concluded.

Emenike will be fondly remembered for his rib
cracking missile against Cote dâ€™Ivoire in the
quarter final of the 2013 Afcon where the Eagles
soared 2-1 at the Royal Bafokeng Stadium,
Rustenburg.