As the United States struggles to overcome a racial divide, the woman known as "the villain" on The Apprentice, Omarosa Manigault, announced Monday she is now director of African-American outreach for the Trump campaign. 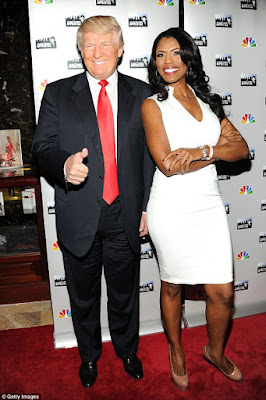 “I am the director of African-American outreach for Donald Trump. I am proud to serve in that role,” Manigault said on MSNBC Monday. “It is a very difficult time for our country, but the good thing I know is that I know Donald Trump at his heart … and I
know what he can do in that role.”When asked about polls that show Trump has zero percent support from African Americans in Ohio (where she is from) and Pennsylvania, Manigault said she was confused about who had been polled because
“I just spent an amazing weekend with African Americans for Trump, about 300 of them."My reality is I’m surrounded by people who want to see Donald Trump as the next president of the United States who are African American,” Manigault added. “Donald Trump is focused on improving the conditions of African Americans in this country … unemployment in African-American community is at an all time high,” she said.Manigault was known for her intensity — and at times controversial actions — on the 2004 season of The Apprentice.