A girl from Onicha Uku has been reported killed by a mad man. 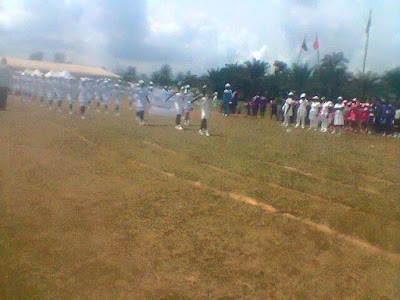 The girl, name unknown at the moment, had just concluded her Jss 3 examination at Ezemu Girls Grammar School, Ubulu uku before her encounter with the mad man last Friday.

According to a source, the mad man was pursuing the girl s little sister when the girl came out and began exchanging words with the mentally deranged. Immediately, the mad man threw a stone and
the stone landed on the girl's forehead.

The girl was rushed to the nearby chemist where she was first treated. Later she was taken to St. Marks Hospital from where she was referred to Federal Medical Centre, Fmc Asaba. She died in the hospital as a result of tetanus. 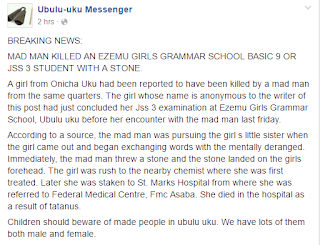