Child Bride Who Was Forced To Marry At 14 In Turkey, Dies In Labour (photo)


A girl who was forced into an arranged marriage at 14 has died in labour after suffering a brain hemorrhage. 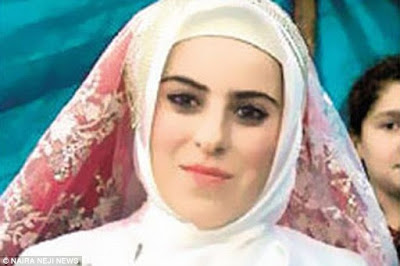 According to Huriyet daily news, Derya B was married in a religious ceremony and gave birth a week ago, aged 15.  She died of complications related to giving birth at such a young age, it is believed.

Derya died in a private hospital in Batman, east Turkey, yesterday October 17. Police are investigating the circumstances of her death.

'It is dangerous for a child bride to get pregnant. The mortality rate is higher in adolescent pregnancies. 'The risks of high blood pressure, early birth or an intervention in the birth are higher. The pregnancies of children who have not completed their physical development and whose organs have not yet completely developed often end in death.'According to charity Girls not Brides, there are 15 million girls married before the age of 18 every year, amounting to one every two seconds.

The United Nations says one woman dies every two minutes in labour.

Last week it was reported that a 12-year-old girl called Lan Lan in China is three months pregnant after she was sold into a forced marriage for £3,600. Two adults were arrested after police and doctors spoke to the youngster in hospital.